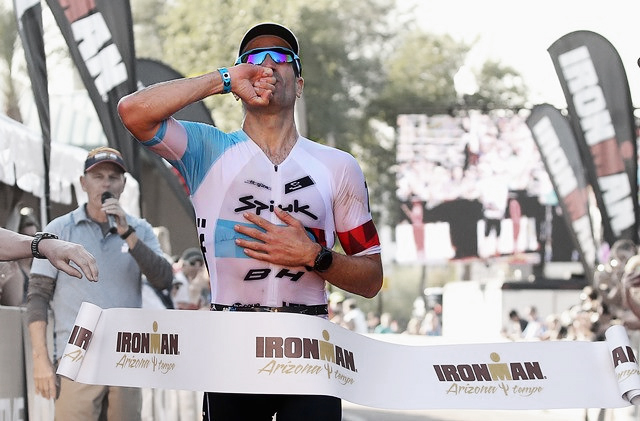 Arizona is home to Colorado’s Grand Canyon, the impressive Monument Valley and also serves as a backdrop for one of the most representative trials on the IRONMAN circuit. A land characterised by its harsh climate, dry land and the saguaro, a giant American cactus that has appeared in countless Westerns. A plant that triumphs despite the extreme climate and the inexorable passage of time. A natural wonder and the perfect symbol for Eneko’s achievements upon winning IRONMAN Arizona so decisively.

Approaching his 42nd birthday, Eneko Llanos has demonstrated that he’s far from featuring in his own twilight western, where the protagonist has seen better times. Eneko Llanos has shown yet again that he can equal the best specialists. A fact confirmed by his victory at IRONMAN Arizona against some of the top specialists in the world. A victory that also guarantees him a place at the 2019 IRONMAN World Championships in Kona, an event he has only missed once since 2005 (in 2018).

The Alava native looked comfortable at Ironman Arizona. Rationing his energy. From low to high. Eneko was at his best and started a spectacular recovery that put him level with race leader Tollakson at kilometre 24. Thereafter, the Vitoria-Gasteiz native pushed ahead and ran the last 18 kilometres to the finish line on his own. Clemente Alonso reacted behind him to finish in second place (8:08:41), relegating America's Tollakson to third place (8:09:53). Insufficient, in any event, to beat the pace set by Eneko Llanos.

A triumph of perseverance

Eneko Llanos was happy. Happy for the victory won, but above all happy for finally breaking free of the disappointments of recent seasons. This win signals the return of a long distance triathlon legend, and the return of a sensation, which for Eneko had started to appear distant: the euphoria of victory:

“It must be more than five years since my last victory at an Ironman. Today's win means more for me than victory at Ironman: it’s a triumph of perseverance, or stubbornness if you prefer. I knew I was capable of performing at this level and didn’t stop until I achieved it."

His victory is a double success as it provides a direct passport to Hawaii in 2019, which will be his 13th attendance. Having almost won in 2008 with a second place finish, and last year not achieving qualification. His return constitutes the rebirth of his sporting career following years when stomach issues had caused him to pull out of races he had entered.

Eneko is back. The legend is back.